Today is the birthday of Jan Morris. In my book, she ranks alongside John Updike, Lawrence Durrell and PG Wodehouse as one of the four finest 20th century writers in English.

Born on October 2, 1926, she is 90 today. And what a remarkable life she has led. She accompanied Hillary and Tenzing and reported their conquest of the Everest in The Times in 1953. But she was James Morris then, a dashing Oxford graduate who had served in the Second World War. She became a woman much later.

She wrote about the sex change operation she had in Morocco in 1972 in her book, Conundrum, published in 1974. You can also read about the operation in another book by her, The World: Life and Travel 1950 -2000, which includes an essay called Casablanca: A Change of Sex. There she wrote:

“As a city Casablanca is something less than romantic, being mostly modern, noisy and garish in a pompous French colonial way. The experience I was to have there, though, struck me then as it strikes me now as romantic to a degree. It was really like a visit to a wizard. I saw myself, as I walked that evening through those garish streets, as a figure of fairy tale, about to be transformed. Duck into swan? Scullion into bride? More magical than any such transformation, I answered myself: man into woman. This was the last city I would ever see as a male.”

Morris had to divorce his wife after the sex change because that was the law, but they continued to live together and were legally reunited on May 14, 2008, in a civil union. 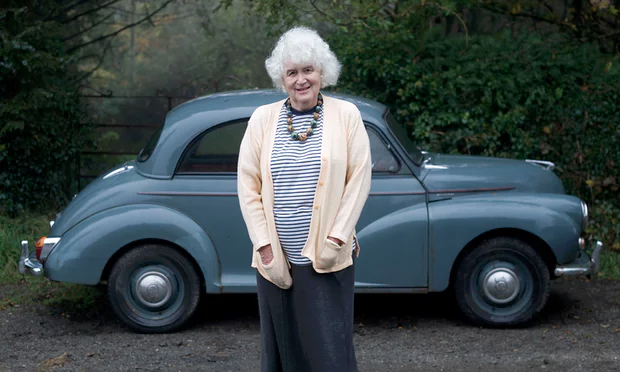 #JanMorris at 90: she has shown us the worldhttps://www.theguardian.com/books/2016/oct/02/jan-morris-life-in-motion?CMP=share_btn_tw … #books #travel #journalism

Morris is a superb travel writer. Here she is writing about Manhattan in the 1950s:

“Manhattan is a haven for the ambitious, and you must not expect its bustling rivalries to be too saintly. Indeed, you may as well admit that the whole place is built on greed, in one degree or another; even the city churches, grotesquely Gothic or Anglican beyond belief, have their thrusting social aspirations. What is wonderful is that so much that is good and beautiful has sprung from such second-rate motives…

“And the city itself, with its sharp edges and fiery colours, is a thing of beauty, especially seen from above, with Central Park startlingly green amid the skyscrapers, with the tall towers of Wall Street hazy in the distance, with the two waterways blue and sunny and the long line of an Atlantic liner slipping away to sea. It is a majestic sight with no Wordsworth at hand to honour it, only a man with a loudspeaker or a fifty-cent guidebook.”

But my favourite is her history of the British empire, a trilogy she began writing as a man and concluded as a woman.

I read the trilogy in Penguin paperbacks. All three of them carried the name of James Morris, not Jan Morris, on the cover. But James Morris was the author of only the first two books, the last was the work of Jan Morris.

Morris was James Morris when she wrote Pax Britannica. That appeared first, in 1968.  Only after writing it did Morris think of weaving it into a trilogy.  “I wrote that book, and I loved doing it,” she told the Paris Review. “Then I thought, Well, I’ll add one on each side of it and make a triptych.”

Morris was still a man but had started taking female hormones when she embarked on Under Heaven’s Command. It came out in 1973 – after her sex change in 1972.

Farewell the Trumpets followed in 1978.

Morris told the Paris Review, “I’m old enough to remember the empire when it still was the empire. I was brought up in a world whose map was painted very largely red… ”

Morris served in the closing stages of the Second World War and then reported for The Times and the Guardian from former colonies or dependencies like India and Egypt after the war.

As she wrote in the introduction to Farewell the Trumpets, “Even I found myself, for a decade of my life, embroiled in the imperial mesh, as I followed the retreating armies of Empire from one after another of their far-flung strongholds.” “It was time the Empire went, but it was sad to see it go,” she added.

I have no reason to feel sad the empire is gone, so why do I love the Pax Britannica trilogy? Because Morris is such a gifted writer and a romantic at heart.

In the interview with the Paris Review, she recalled how she came to write the trilogy:

“Supposing in the last years of the Roman Empire one young centurion, old enough to remember the imperial impulses and the imperial splendor but recognising that it was passing, sat down and wrote a large book about his sensations at that moment. Wouldn’t that be interesting? Said I, But somebody could do it about this still greater empire, the British Empire. Who is that? I asked myself. Me!”

“Of course, there is one small distortion in my kind of history in that it aims to entertain. So it does in effect ignore little matters like economics,” Morris told the Paris Review. So, yes, she has shortcomings. But you don’t notice that as she carries you along, describing places, recalling events, like a born storyteller.

Here are the opening lines from the first chapter of Under Heaven’s Command:

“In October 1857 the Honourable Emily Eden, a witty and accomplished Englishwoman in her forty-first year, was accompanying her brother Lord Auckland, Governor-General of India, on an official progress up-country from Calcutta. Lord Auckland was homesick, but his sister was irrepressibly entertained by everything she saw, and she recorded all her impressions in vivacious letters home. She was anything but innocent or provincial. She was born in Old Palace Yard, within sight of Parliament at Westminster, and had always lived near the centre of English power. Her father had been Postmaster-General and President of the Board of Trade, her eldest sister had been the only true love of the younger Pitt, and she herself was an intimate friend of Lord Melbourne the Prime Minister. She was accordingly amused rather than awed by the scale and grandeur of His Excellency’s company.”

This is history as readable as a Jane Austen novel.

Morris may not have come up with anything like Wodehouse’s Jeeves and Bertie Wooster or written a novel like Durrell’s Justine or Updike’s Rabbit Angstrom saga. The Pax Britannica trilogy may be too sentimental, too romantic, for some who like their history to be more scholarly and analytical. But, while she may not be a great novelist or historian, she is clearly a wonderful writer. And that’s all I want. Prose almost as good as poetry.