Why do the most popular love stories have star-crossed lovers?

Think of Romeo and Juliet.

I am not ashamed to admit I was moved by Erich Segal’s Love Story.

Nicholas Sparks’ handkerchief-wetting The Notebook ends with the lovers embracing, but one of them has Alzheimer’s.

Louis de Bernieres’  Captain Corelli’s Mandolin ends in a lovers’ reunion in old age, but it makes you sad they were separated for such a long time and wasted so many years because the only time he saw her in all those years, she had a baby in her arms and that made him think she was married and so he did not go up to speak to her.

In Ian McEwan’s Atonement, the lovers reunite, or so it seems, but then it turns out they may have never met again – that their reunion was only a chapter in a novel written by the girl who ruined their lives and then tried to atone for that by writing a love story about them with a happy ending.

The End of the Affair

Even more haunting than Atonement, if you ask me, is Graham Greene’s The End of the Affair, which conveys the agony of love more powerfully than any of the other novels mentioned here.

Graham Greene, of course, was a fine writer and a master storyteller. And he used both the gifts to write one of the most poignant love stories in The End of the Affair. It’s not a sentimental love story. “This is a record of hate far more than of love,” says the narrator in the first page of the novel.  At the beginning of the novel, the narrator, Maurice Bendrix, a writer, hates the woman he loves – and her husband – because she had broken off with him more than one and a half years ago. But he then discovers she still loves him though she won’t have him because of a promise she made to God.

The End of the Affair is the last of the four Catholic novels written by Graham Greene, coming after Brighton Rock, The Power and the Glory, and The Heart of the Matter. Sarah Miles, the woman Bendrix loves, has spiritual yearnings. That does not prevent her from having extramarital affairs.

The novel opens with her civil servant husband, Henry Miles, telling Bendrix one night in January 1946 that he suspects her of having an affair, not knowing she had an affair with Bendrix, too. Jealous, to find out who her new lover is, Bendrix then hires a detective. The detective follows Sarah, steals her diary and hands it to Bendrix, who then discovers she still loves him.

The diary recalls the day in June 1944, during the Second World War, when a bomb fell on the London flat where she was meeting Bendrix and he was injured. Please let him live, she prayed to God. She also made a promise to God: “I love him, and I’ll do anything if you’ll make him alive, I said very slowly, I’ll give him up for ever, only let him be alive…” “People can love without seeing each other, can’t they, they love You all their lives without seeing You,” she said to God.

Reading these words in her diary, where she also wrote she still dreamed of him, Bendrix knows she still loved him. Immediately, he wants to see her again and have her back in his life.

But Sarah, torn between her promise to God and her longings (“I want Maurice. I want ordinary corrupt human love. Dear God…” she wrote in her diary), doesn’t want to resume the relationship.

She has promised not to leave her husband, who says he needs her.

When Bendrix rings her up to say he is coming to her house, she hastens out.

Bendrix still manages to catch up with her after she walks into a church. There, when she begins to cough, he realises she is unwell. He tells her to go home and rest after she falls asleep while being told by him how they could live together on his earnings as a writer. She leaves after he kisses her.

Reassured he will meet her again, he works happily the new few days on the books he is writing. Then comes a phone call from her husband. “Sarah’s dead,” says Henry.

She caught a cold, didn’t see a doctor, went out again a few days later, returned home soaking wet and fell ill. When the doctor came, it was too late. “He said if she’d penicillin a week earlier, he’d have saved her,” Henry tells Bendrix.

Henry wants Bendrix to stay with him, keep him company, even though he knows by now his wife had an affair with Bendrix. “I don’t know what I’d do without you, Bendrix,” he says, just as he had told his wife earlier he couldn’t do without her.

It’s also a book about writing. “Maurice’s pain goes into his writing: you can hear the nerves twitch through his sentences,” Sarah writes in her diary.

The writer himself says how he writes. “So much of a novelist’s writing takes place in the unconscious: in those depths the last word is written before the first word appears on paper.”

Even the love affair is sparked by Bendrix’s needs as a writer. “I doubt whether I should ever have troubled to know Henry or Sarah well if I had not begun in 1939 to write a story with a senior civil servant as the main character,” he writes.

The very first sentence of the book is a comment about how arbitrary a story can be. Bendrix the narrator writes: “A story has no beginning or end: arbitrarily one chooses that moment of experience from which to look back or from which to look ahead.“

He then recalls walking up to Henry, who tells him he suspects Sarah is having an affair, and we are plunged into the story.

The book ends with the two men walking together for a beer, Henry to drown his sorrows now that his wife is dead, Bendrix drained, all passions spent. Now it’s his turn to pray to God, but his prayer is different from Sarah’s. Here are his last lines: “I wrote at the start that this was a record of hate, and walking there beside Henry towards the evening glass of beer, I found the one prayer to serve the evening mood: O God, You’ve done enough, You’ve robbed me of enough, I’m too tired and old to learn to love, leave me alone for ever.” 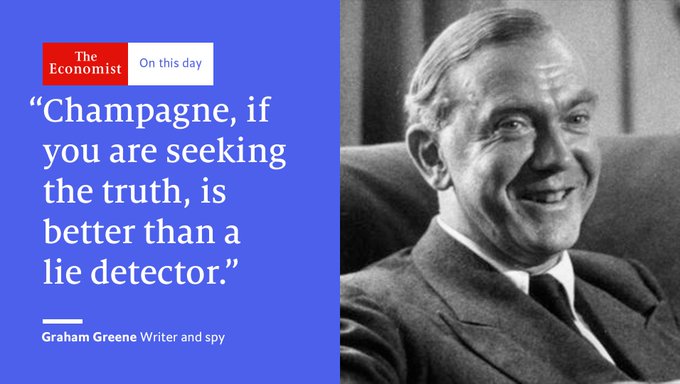 Graham Greene—born #OnThisDay 1904—was not the first novelist to experiment with espionage http://econ.trib.al/fzYHDL8

Yesterday, marking the birthday of Graham Greene (October 2, 1904 – April 3, 1991), the Economist tweeted about an article it had published earlier, recalling he had worked as an agent for MI6, the British intelligence service. He was a prolific writer, writing thrillers, spy stories, memoirs, but he will probably be best remembered for The Power and the Glory (1940), The End of the Affair (1951) and The Quiet American (1955).

Sarah Miles was based on Greene’s mistress, Catherine Walston, the wife of the Labour peer Harry Walston. “The End of the Affair did strain their relationship,” says Michael Gorra in his introduction to the novel. “Greene had a taste for practical jokes, and could not resist assigning the given name of Catherine’s husband, Harry Walston, to the cuckold; while Sarah’s house on Clapham Common matches the one the novelist himself had shared with his wife and children before the war. Greene’s involvement with Catherine lasted for much of the 1950s. After the novel’s publication, however, Harry Walston became harder to manage, and the affair also developed a tension of its own, with Catherine increasingly subject to religious reservations; life imitating art. There were some periods of happiness, especially in the house on Capri that Greene had found with Catherine. But his romantic agony did undoubtedly help motivate his search, in the early 1950s, for the frisson of physical danger on journalistic assignments in Malaysia, Kenya, and especially Vietnam.”

Graham Greene’s experiences as a war correspondent for The Times and Le Figaro in Indo-China led him to write The Quiet American. There’s a love triangle there, too, the British journalist Thomas Fowler and the American CIA agent Alden Pyle vying for the love of the Vietnamese Phuong with fatal consequences.

The Quiet American is a dark, complex novel. It may even be better known than The End of the Affair because it was about Vietnam.

But The End of the Affair is unforgettable as a tragic romance. It’s impossible to forget Sarah. And then there are memorable like these. When Bendrix, who hated Sarah when she broke off with him, reads her diary and finds she still loves him, he writes: “It’s a strange thing to discover and to believe that you are loved, when you know there is nothing in you for anybody but a parent or a God to love…”

That’s writing. In ordinary life, the discovery that you are loved is indeed as momentous as a moon shot.