Journalist and writing teacher William Zinsser says in his book, On Writing Well: “I’m occasionally asked if I can recall a moment when I knew I wanted to be a writer. No such blinding flash occurred. I only knew that I thought I would like to work for a newspaper.”

Zinsser, who was born on this day 92 years ago, on October 7, 1922, got his wish. He worked for the newspaper of his dreams – the New York Herald Tribune – before teaching writing at Yale, at the New School and the Columbia University Graduate School of Journalism. His book, On Writing Well, is a classic guide for non-fiction writing. First published in 1976, it’s still relevant today. 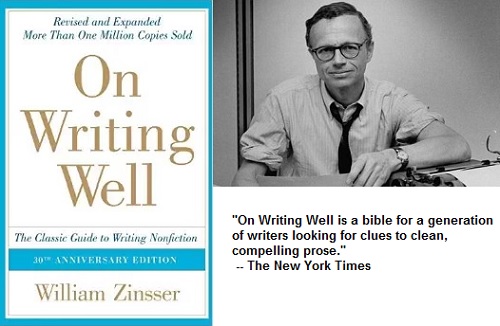 He says: “Besides wanting to write as well as possible, I wanted to write as entertainingly as possible. When I tell aspiring writers that they should think of themselves as part entertainer, they don’t like to hear it – the word smacks of carnivals and jugglers and clowns. But to succeed you must make your piece jump out of a newspaper or a magazine by being more diverting than everyone else’s piece. You must find some way to elevate your writing into an entertainment. Usually this means giving the reader an enjoyable surprise. Any number of devices will do the job: humour, anecdote, paradox, an unexpected quotation, a powerful fact, an outlandish detail, a circuitous approach, an elegant arrangements. These seeming amusements in fact become your ‘style’. When we say we like the style of certain writers, what we mean is that we like their personality as they express it on paper. Given a choice between two travelling companions – and a writer is someone who asks us to travel with him – we usually choose the one who we think will make an effort to brighten the trip.”

Writers have to entertain, but it’s not easy, he says. “Writing is hard work. A clear sentence is no accident. Very few sentences come out right the first time, or even the third time. Remember this in moments of despair. If you find that writing is hard, it is because it is.”

Urging simplicity and clarity, he says: “The secret of good writing is to strip every sentence to its cleanest components. Every word that serves no function, every long word that could be a short word, every adverb that carries the same meaning that’s already in the verb, every passive construction that leaves the reader guessing who is doing what – these are the thousand and one adulterants that weaken the strength of a sentence.”

At the same time, he advises writers to use dictionaries and the thesaurus.

“Make a habit of reading what is being written today and was written by earlier masters,” he says.

”Also get in the habit of using dictionaries…

“And don’t scorn the bulging grab bag Roget’s Thesaurus… The Thesaurus is to the writer what a rhyming dictionary is to the songwriter – a reminder of all the choices – and you should use it with gratitude.”

He also advises writers to pay attention to sound and rhythm.  “Also bear in mind, when you’re choosing words and stringing them together, how they sound. This may seem absurd: readers read with their eyes. But in fact they hear what they are reading far more than you realize. Therefore such matters as rhythm and alliteration are vital to every sentence.”

A writer as meticulous as Zinsser did not like his writings to be tampered with. He explains, “I’ve always felt that my ‘style’ – the careful projection onto paper of who I think I am – is my main marketable asset, the one possession that might set me apart from other writers. Therefore I’ve never wanted anyone to tinker with it, and after I submit an article I protect it fiercely. Several magazine editors have told me I’m the only writer they know who cares what happens to his piece after he gets paid for it…

“I’m a known crank on this issue – I fight over every semi-colon. But editors put up with me because they can see that I’m serious. In fact, my crankiness has brought me more work than it has driven away. Editors with an unusual assignment often thought of me because they knew I would do it with unusual care.”

He talks about good editors and bad editors. “A good editor likes nothing better than a piece of copy he hardly has to touch. A bad editor has a compulsion to tinker, proving with busywork that he hasn’t forgotten the minutiae of grammar and usage. He is a literal fellow, catching cracks in the road but not enjoying the scenery. Very often it simply doesn’t occur to him that a writer is writing by ear, trying to achieve a particular sound or cadence, or playing with words just for the pleasure of wordplay. One of the bleakest moments for writers is the one when they realize that their editor has missed the point of what they are trying to do.”