I just read a poem by Emily Dickinson and two poems by Elizabeth Bishop which I had never read before. Emily Dickinson’s poem is about a carriage ride with Death. Elizabeth Bishop’s poems have humour and sadness. I found them in a collection of poems where the poets are introduced by the adman Maurice Saatchi’s late wife, the writer Josephine Hart. 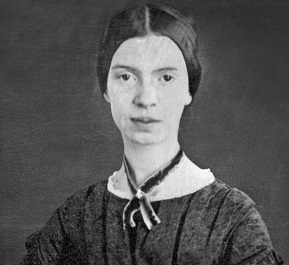 Both Dickinson and Bishop were born in Massachusetts. Neither married. Dickinson lived her life in Massachusetts and her poems were published only after her death. Bishop travelled widely, spent many years in Brazil where she had an affair with another woman, won the 1956 Pulitzer Prize for her collection, Poems: North & South/A Cold Spring and the 1970 National Book Award for her Complete Poems (Farrar, Straus and Giroux, 1969). It’s safe to say, though, Dickinson has become the more iconic figure, widely anthologized.

Here are the three poems I mentioned, Emily Dickinson followed by Songs for a Colored Singer and Filling Station by Elizabeth Bishop.

Because I could not stop for Death –
He kindly stopped for me –
The Carriage held but just Ourselves –
And Immortality.

We slowly drove – He knew no haste
And I had put away
My labor and my leisure too,
For His Civility –

Or rather – He passed us –
The Dews drew quivering and chill –
For only Gossamer, my Gown –
My Tippet – only Tulle –

The next two poems are by Elizabeth Bishop. She is colloquial, homely and informal. There is both humour and sadness in the following poem.

A washing hangs upon the line,
but it’s not mine.
None of the things that I can see
belong to me.
The neighbors got a radio with an aerial;
we got a little portable.
They got a lot of closet space;
we got a suitcase.

I say, “Le Roy, just how much are we owing?
Something I can’t comprehend,
the more we got the more we spend….”
He only answers, “Let’s get going.”
Le Roy, you’re earning too much money now.

I sit and look at our backyard
and find it very hard.
What have we got for all his dollars and cents?
–A pile of bottles by the fence.
He’s faithful and he’s kind
but he sure has an inquiring mind.
He’s seen a lot; he’s bound to see the rest,
and if I protest

Le Roy answers with a frown,
“Darling, when I earns I spends.
The world is wide; it still extends….
I’m going to get a job in the next town.
Le Roy, you’re earning too much money now.

The time has come to call a halt;
and so it ends.
He’s gone off with his other friends.
He needn’t try to make amends,
this occasion’s all his fault.
Through rain and dark I see his face
across the street at Flossie’s place.
He’s drinking in the warm pink glow
to th’ accompaniment of the piccolo.

Go drink your wine and go get tight.
Let the piccolo play.
I’m sick of all your fussing anyway.
Now I’m pursuing my own way.
I’m leaving on the bus tonight.
Far down the highway wet and black
I’ll ride and ride and not come back.
I’m going to go and take the bus
and find someone monogamous.

The next poem by Elizabeth Bishop is more homely and affectionate.

Oh, but it is dirty!
—this little filling station,
oil-soaked, oil-permeated
to a disturbing, over-all
black translucency.
Be careful with that match!

Father wears a dirty,
oil-soaked monkey suit
that cuts him under the arms,
and several quick and saucy
and greasy sons assist him
(it’s a family filling station),
all quite thoroughly dirty.

Do they live in the station?
It has a cement porch
behind the pumps, and on it
a set of crushed and grease-
impregnated wickerwork;
on the wicker sofa
a dirty dog, quite comfy.

Some comic books provide
the only note of color—
of certain color. They lie
upon a big dim doily
draping a taboret
(part of the set), beside
a big hirsute begonia.

Why the extraneous plant?
Why the taboret?
Why, oh why, the doily?
(Embroidered in daisy stitch
with marguerites, I think,
and heavy with gray crochet.)

Somebody embroidered the doily.
Somebody waters the plant,
or oils it, maybe. Somebody
arranges the rows of cans
so that they softly say:
ESSO—SO—SO—SO
to high-strung automobiles.
Somebody loves us all.

Hart wrote the bestseller Damage, about passion and betrayal, which was made into a movie directed by Louis Malle and starring Jeremy Irons and Juliette Binoche.

In the introduction to Life Saving: Why We Need Poetry, Peter Stodhart, the former editor of The Times and The Times Literary Supplement, writes: “At each show, before any of her actors performed, before Bob Geldof growled out the lyrics of WB Yeats, or Harold Pinter intoned Philip Larkin, or Roger Moore played Kipling, the audience heard Josephine Hart’s introductions.”

This book contains the poems as well as the introductions. They are short profiles of the poets recalling their lives, characters and works. Short but interesting, they make good reading. For example, this is how Hart began her introduction to Auden, with a quote from him:

“One Sunday afternoon in March 1922 a school friend casually asked me if I wrote poetry. I, who had never written a line or even read one with pleasure, decided at that moment that poetry was my vocation.”

(This book has two poems by Auden: Musée des Beaux Arts and In Memory of WB Yeats.)

In her introduction to Emily Dickinson, Hart writes, “Was there an object of affection, of desire? If there was, his identity remains obscure.” Noting she wrote “passionate poems, full of longing, which gave way to poems of loss, Hart concludes her introduction with a quote: “Perhaps in Ted Hughes’ haunting phrase, Emily Dickinson realized that her ‘unusual endowment of love was not going to be asked for’. “

It’s a pleasure to read introductions like this. Many of the poems in this anthology can be found elsewhere, but it’s still worth reading because of its introductions to the poets. They add value to this book.